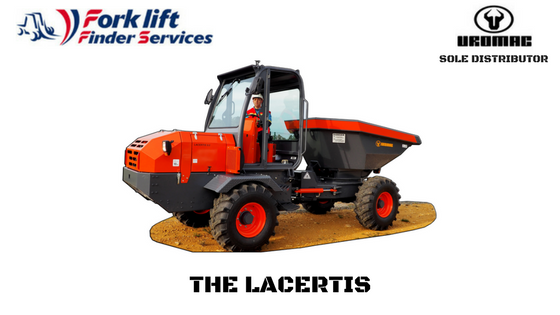 Heavy machines are rarely adaptable; they’re built for one job only. Uromac, though, understood the need for diversity and created the Lacertis. This is one machine that offers many benefits both on and off projects.

The Lacertis was designed so that different jobs can get done with one machine. The chassis stays the same, but whatever’s attached to it is interchangeable. This means the dump truck can turn into a concrete mixer. The concrete mixer can then become a brush cutter!

On a job, drivers must look around to see where they’re going and make sure they’re dumping things in the right place. This is bad ergonomics, mostly for their necks, midsection and back. Lacertis models have a 360-degree swivel seat that allows a full range of vision.

Uromac designed their products for easy transport. Because they’re not considered a “bulky” machine compared to some others, the loading/unloading process is quick. The Lacertis can drive on a railway as well, thanks to special wheels fitted on the chassis. This is a feature on many Uromac products after the company made its way into the railway sector.

Well, the functions written above are also benefits, but there are some others worth listing.

Rather than wasting money on several heavy-duty machines, project managers and directors can invest their money in one. Companies are always looking for ways to boost their return on investment. Saying you completed a project without spending the whole budget is music to anyone’s ears.

Some machine producers have good equipment but not enough diversity in their range. Project managers might have to get a dumper from one place and a concrete mixer from another. Uromac solves that problem. It’s a matter of sending the chassis to the shop and having it fitted with the right attachment.