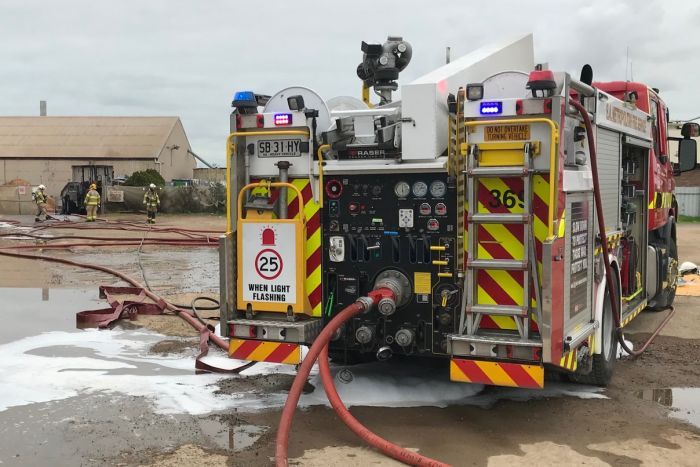 Authorities believe a small explosion which caused a major blaze at a waste facility in Adelaide’s north was sparked by aerosol cans being moved on a forklift. 3 Aug 2019, 3:45pm – With thanks, ABC NEWS

It points to the importance of  FLAME-RETARDANT FORKLIFT for hazardous areas.

FLAMEPROOFING of electrically powered equipment is mandatory for operation within hazardous areas where a risk of explosion or fire ignition exists due to the presence of dangerous gases in the air.

Nichiyu, Japan’s largest dedicated manufacturer of battery-electric forklifts, is said to be one of the few forklift suppliers that build flameproof forklifts that are fully certified to Australian Standards for use in the most hazardous areas where powered materials handling equipment can be used.

Hazardous sites are evaluated according to the type and volume of hazardous materials, the area in which the materials are handled, and the ventilation conditions.

These areas are classified as Class 1, Zone 1* and accordingly, the Japanese company’s flameproof forklifts meet the requirements of all insurance underwriters for hazardous area operation.

All electronic equipment, such as the control system and motors, is installed in completely airtight enclosures designed to withstand the force of an explosion.

According to Chess Flameproofing’s consultant Mike Robbins, materials handling equipment such as forklift trucks, tow tractors, sweepers, scissor lifts and boom lifts for use in hazardous areas need to be modified to remove or reduce the risk of the equipment becoming a source of ignition.

“Both diesel and battery-electric powered forklifts can be flameproofed, however spark ignition engines such as those powered by LPG and petrol are prohibited in hazardous areas.”

Battery-electric vehicles can be modified to make them suitable for use in Zone 1, 2, 21 or 22 areas.

“In line with the global trend to risk assessment, Chess Flameproofing carries out extensive risk assessments on each industrial vehicle we convert or modify,” Robbins said.

“This is supported with design verification and, where appropriate, third-party testing by independent, accredited testing authorities. A series of in production inspections, pressure and electrical testing is followed by final inspection of the equipment, which is then put through simulated operating condition tests and subjected to temperature rise tests in accordance with AS2359.12.

“A certificate of compliance to the nominated flameproofing specification is issued with each flameproofing installation,” he added.

“For extreme applications where a certificate of compliance is not satisfactory, full certification to Australian Standards from independent, accredited testing/certifying authorities is available at a considerable premium.”

*Class O is the highest classification for hazardous areas and no powered materials handling equipment may be used in such environments.

When Metropolitan Fire Service (MFS) crews arrived, they discovered a forklift on fire with flames spreading to shipping containers.

About 35 firefighters contained the fire in about 10 minutes, while the forklift driver has been taken to hospital as a precaution.

“He’s OK, he’s a little bit shaken but the ambos have had a look up at him as well. He’s going to go to hospital just for some check-ups,” MFS Commander Greg Davis said.

The MFS said it appears that an aerosol can was pierced and then ignited sawdust while being moved by forklifts — one of which was destroyed.

“They were pushing some aerosol cans together. It appears it’s just gone boom,” Commander Davis said.
“I have been advised some of those containers were from a previous fire in Victoria.

“We’ve been doing atmospheric monitoring as well to make sure the area is safe.”

The Environment Protection Authority attended the scene and the MFS has estimated the damage bill at $300,000.

According to Veolia’s website, the facility deals with “liquid and hazardous waste” to either recycle it or make it safe for landfill or wastewater.