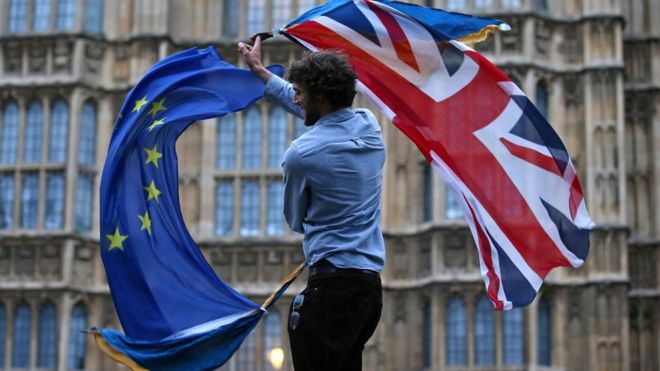 At a recent UK Warehouse Association briefing at the House of Lords, Tony Thomas, deputy director of the pan-Government Border Delivery Group, advised: “It remains the case in law that the UK is set to leave the EU on 31 October 2019, so it is important that businesses prepare themselves for that date and do not assume that they can put off preparations.”

As Forkliftaction News found in discussions with manufacturers and importers, the UK materials handling market was prepared for a departure from the EU earlier this year, with most having contingencies in place for the worst-case scenario – a no-deal exit.

Few suppliers will be impacted harder by Brexit than parts supplier TVH. “Our company is totally dependent on the free movement of goods,” says TVH UK key accounts manager Graham Hughes, adding that TVH ships around 1,000 parcels a day into the UK and Northern Ireland – 95% of those on express delivery.

Hughes believes a no-deal Brexit could cost TVH “hundreds of thousands of Euros”. To minimise the impact, the company has undertaken a review of courier routes to try and avoid customs delays and a revamp of invoicing systems so that customers will be billed by TVH UK. Unfortunately, that means end-users will be liable for VAT, which may impact their cash flow.

At the other end of the spectrum is Irish manufacturer Combilift. As reported in March, Brexit could have a huge impact on the company which manufactures just south of the border with Northern Ireland, has employees who cross the border daily, uses subcontractors in Northern Ireland, sources components from the UK and sells 25% of its output to the UK which is treated as a “home market”, according to managing director Martin McVicar.

Combilift is now armed with Authorised Economic Operator status “which means our spare parts and components can travel across the border without checks”, he says. “We have a full-time person managing that process, so it has been a cost – but it’s a worthwhile investment for our business – even if there is a Brexit deal agreed.”

McVicar has also reviewed supply lines and the company is rerouting some heavy components via Rotterdam and into Dublin port. “We’ve tried to minimise the land bridge because we believe trucks will not be held up for hours, but possibly for days,” he explains.

Combilift is not “overly concerned” about the possible imposition of the 4.5% WTO tariff anticipated in the case of a no-deal Brexit. Since most materials handling equipment is imported, the 4.5% rise will probably be accepted by UK buyers as an inevitability. More concerning, however, is the added 4.5% cost added to components imported from the UK – which will have to be passed on to customers in all of Combilift’s other export markets.

To date, Brexit may have been a positive for the big-name importers as customers started stockpiling in anticipation of Brexit.

“We’re seeing additional storage facilities, and with those, you’re looking at additional racking and additional forklifts, so we’re seeing a spike,” says Simon Barkworth, managing director – UK, Crown Lift Trucks. He identifies pharmaceutical companies, medical suppliers and the FMCG sector among those which are looking at their supply chains and holding greater stock in the UK.

“What people have realised is that come October 31, everyone is at peak for Christmas. The ports are at their busiest. Warehouses are at capacity, so how are they going to store more for the unknown?”

Even though the majority of Toyota product is manufactured in Europe, Jon Buckley, Toyota Material Handling UK commercial director, hasn’t yet seen any Brexit impact. “There are elements of deferred investment from customers and there are projects that have been delayed; however, the market has been really resilient – we’re up about 5% this year,” he says.

To some extent, Buckley sees the Brexit build-up as stimulatory. “We’ve seen some benefit from the pre-stocking, but that benefit has passed and the market is still growing.”

Buckley doesn’t use the term stockpiling, instead explaining: “We have made some adjustments to our stock holdings to support our customers.”

The UK’s largest supplier doesn’t envisage any major delays in deliveries from its European factories, even in a no-deal environment. “We’re already prequalified with the EU, so even if we’re an outsider, we’ll still have a direct flow of materials.”

On the parts front, even if shipments were stopped, “it would be months before customers were affected,” he notes.

UniCarriers is among the forklift suppliers which have been “gently building up our short-term hire fleet over the past 24 months”, says Chris Bates, UK sales director, who says his fleet has grown by about 25%. “The purpose was to ensure that if we got a spike in demand and couldn’t fill new truck orders for any reason, then we met the requirement from that fleet,” he says.

“We also increased our parts stockholding by around 25% (in preparation for the last deadline),” he adds, noting that the company actually benefited from movements in the exchange rate when it sold down the stock. But now, UniCarriers is again building its stockpile “because we just don’t know what the impact on the flow from Europe will be”.

“To anticipate every type of Brexit, since we don’t have a clear picture of what is going on, our dealers have been stockpiling since January,” says Manitou product manager Antoine Roger. He believes the uncertainty is impacting on orders, with many customers taking a “wait and see” approach.

Expressing a common view among European manufacturers, Hubtex UK sales and marketing manager Paul McNally notes that “all of the manufacturers are going to have the same challenge”.

“Whatever the decision is, we will face it,” he says. “But we face it in a positive way. We’ll find a solution that works for our customers.”

Parts supply is crucial to attachments specialist B&B Attachments, and managing director Mike Barton says his company is looking at “minimum stocking levels to minimise the risk of not having a particular part available”.

“We are taking the steps that we need to take – based on what we know at this point of time,” he says.

Fork manufacturer Bolzoni, which has production in Europe and in China, had to re-examine its supply strategy to deal with anti-China tariffs in the USA, so the prospect of tariffs in the UK is not a new challenge. Marketing and sales director Carlo Fallarini says: “For the UK, we will have to see.” So far, there are no plans to stockpile beyond “a reasonable level of stock”, he adds.

Rival Cascade both imports attachments into the UK from Italy and exports forks to Europe from the UK, according to managing director Charlie Mitchelson. “We’d been trying to build up some stock in different locations as we prepared for Brexit in March – which didn’t happen – and we’ve been working that inventory off. For now, we’re moving inventory around in a short-term inventory program,” he notes.

As previously reported, distributor Impact Handling has seen slower purchase decisions and a growth in short-term rentals and hire-to-purchase activity amid Brexit uncertainty.

CEO Terry Kendrew hints at stockpiling, saying “our business model accommodates a lot of stock within our supply chain”.

“We bring in a lot of stock because we want fast delivery to the customers,” he explains, adding that stock was built up for the initial Brexit deadline and Impact still has “sufficient capacity”.

The real challenge, he says, is the expectation of fast delivery of parts “and we have a significant stock of parts within our business to ensure parts availability”. If there are any delays in sourcing parts, Impact can turn to its short-term rental fleet to “deputise for the (non-functioning) machine”.

Similarly, distributor Briggs believes its suppliers, including Yale and Hyster, will deal with whatever challenges Brexit brings. Managing director Peter Jones says his main concern is parts availability and the company has already increased its stock levels. “We ran that up in March and ran it down a bit, but we’re building it again for the end of October,” he explains.

Like Impact, Jones says the biggest Brexit effect is the “level of stagnation for people committing to new product and replacement fleets”, a trend that has escalated over the last two or three months.

What about the Asians?

Chinese manufacturer BYD currently sources all its UK product from the Netherlands, where it has its European head office and warehouse. Blade Feng, business director of BYD’s European Forklifts, says in the case of a no-deal Brexit, the company might have to consider direct imports from China by its UK subsidiary.

“It’s good because BYD UK is growing fast – mostly because of (large bus orders) and we have a large facility close to London … and we’re actually securing new facilities which will be much bigger and could handle the worst-case scenario Brexit,” he says.

For manufacturers like Doosan, which produces all models in Korea, Brexit is a non-issue. David Clarkson, CEO of Doosan Industrial Vehicles UK, doesn’t anticipate any impact, regardless of the Brexit arrangements.

Even if UK ports are affected by the additional customs burdens and flow is slowed, Clarkson believes his company will not be impacted. “Going through our Northampton workshop, on a monthly basis, we have around 180 to 200 machines being prepared for delivery to customers. So, we have 200 in the workshop, 200 to go through for the next month and 200 on the water. So, we have a three-month rolling cycle to ensure that we have a flow of machinery so that the end user is not affected.”

To deal with any potential slump in market demand, Clarkson says his company has been growing its short-term rental fleet. “There’s some trepidation on the part of companies to sign long-term agreements, and we want to be in a position where we can offer our equipment on a very flexible basis,” he explains, adding that utilisation of the rental fleet is currently running around 80%.

As for the impact of Brexit on the industry: “I only wish I knew,” he says. And he’s certainly not alone there!