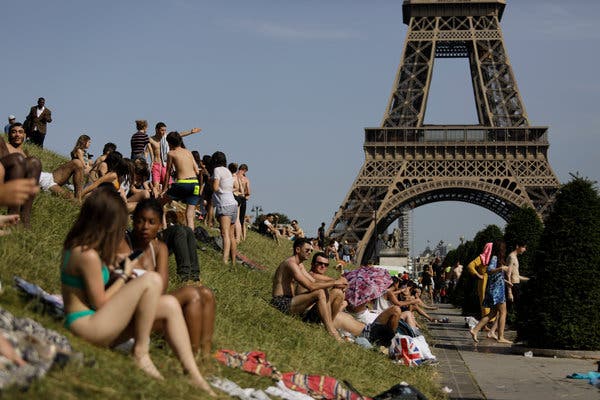 As Aussies deal with a bit of cool weather, Europe last week recorded all-time high temperatures (up to 45.9 degrees C in parts of France), leading to public health warnings in various countries. The mercury also hit record highs in parts of Germany, Poland, Spain and the Czech Republic.

Like many other areas in industry, operator success depends on having the right tools or machine, and looking after operator comfort and safety.

8. Noise Absorption and Vibration Isolation and noise-deadening material under the bonnet and in the cab  through floating cab, and the correct tyres.

FORKLIFT FINDERS can’t change the weather, but we can ensure you have the right machine for your operator and for the job at hand. www.forkliftfinder.com.au Since 1999 | 24/7 enquiries 0414746181 | 60 Bellevue Ave ENOGGERA.

The recent European weather has seen public events cancelled and caused schools in France to postpone exams for the first time ever, but there have been no official reports of industrial closures to cope with the heat. Some northern workplaces are currently closed for holidays, so their forklifts and operators have been spared the intense heat, but for those still operating, caution has been advised.

“A major cause of unit downtime over warmer months is engines overheating due to low levels of coolant or incorrect coolant being used. Like most products, engine coolant has a recommended shelf life. Make sure you replace engine coolant regularly, as necessary,” its blog advises.

The engine fan is critical in maintaining low engine temperatures as it removes surface heat from the engine bay, according to the dealer. Cracked or damaged fans reduce a fan’s performance, which can lead to increased operating temperature and engine damage.

Manitou director of global industrial sales and development Patrick Laridan believes his company’s machines can cope with very hot weather. “The only thing is to watch the warning light on the cooling indicator,” he advises.

According to Carl Modesette, director of product engineering for UniCarriers Americas, most standard products are rated for environments up to 40 deg. C (104 deg.F).

He notes that controllers typically have pre-programmed thresholds that will limit performance and warn the operator when operating temperatures are getting too high, and they also have the ability to shut down the vehicle safely if certain temperature limits are exceeded.

Modesette’s tips for optimal performance in hot conditions include keeping all heat exchangers clean and free of debris, choosing fluids (coolant, oils, etc.) which are appropriate for both the equipment and the operating environment, and taking advantage of optional features like vented side panels or underbelly screens to allow more airflow through the engine compartment and across the radiator, while preventing debris from getting “vacuumed” up into the compartment.

For electric equipment, battery size and type, charger type, as well as the frequency of charging and changing batteries should be evaluated based on the application. The number of batteries in a fleet may need to be increased to allow sufficient time for batteries to cool.

“It can be challenging to configure trucks to operate in a wide temperature range,” Modesette adds. “Some of the measures described above would allow the unit to work well in very hot environments but may render them less well-suited to colder environments. Large fleet users often segregate equipment configured for specific temperatures.”

Fleet managers should not only be concerned about their equipment, but they should also ensure that their operators have safe working conditions.

“Drivers should be encouraged to drink only water, rather than energy drinks and sugary drinks that can cause blood sugar spikes followed by a noticeable crash in energy and an increase in fatigue. While many new forklifts come with a cup or bottle holder, if your existing forklifts don’t have them, you can retrofit them from any number of suppliers,” he advises.

With thanks from Forklift Action